The History of Châteauneuf-du-Pape comes directly from the popes who, when installed in Avignon in the fourteenth century, revealed the terroir of Châteauneuf-du-Pape. Under the reign of John XXII, the village becomes the summer residence of the papacy. As for the precious nectar produced in this area, he granted the wine to the rank of "Vin du Pape", opening the doors of the great European courts.

Most of the appellation being covered with pebbles is always stupefaction when you come to Châteauneuf-du-Pape for the first time, especially when the reason is, they have been brought by the Rhône many century ago.

Our three plots of Châteauneuf du Pape are located at Pradel, Route de Courthézon and the last one being at Les Grandes Serres.

The style of the Domaine for this wine is the traditional one, with mostly Grenache and Syrah. The notoriety of Châteauneuf-du-Pape comes from Grenache. 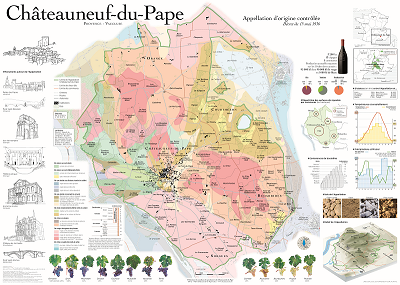